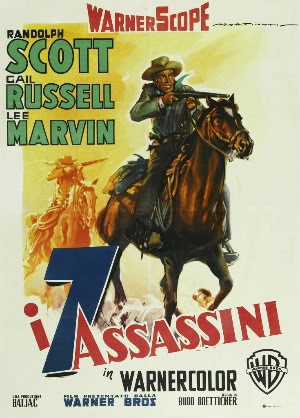 I was just thinking the other day that it will soon be close to a year since I got my hands on Sony’s superlative set of Boetticher/Scott westerns. Those movies were at the very top of my most wanted list for so long, and it still gives me great pleasure to know that I can now pick them off my shelves and enjoy them any time I please. With that thought in mind, I decided to give Seven Men from Now (1956) another view. This film is of course not officially part of the Ranown group of titles, but it was the first to bring together Scott, Boetticher and Kennedy – so it is the movie that kicked off that cycle and it’s also the template for what was to follow.

As soon as the title credits have rolled the film immediately kicks into gear. Out of the darkness, and a violent storm, comes the lone figure of a man making his way towards the shelter of a nearby cave. It’s already occupied by two vaguely uneasy men, but they still offer the stranger a cup of coffee and a seat by the fire. A stilted conversation follows, but when a killing in the town of Silver Springs is brought up something snaps. The camera cuts away, gunfire is heard, and only one man will ride off. That man is Ben Stride (Randolph Scott), former sheriff of the aforementioned town and now a driven manhunter. Seven men robbed the Wells Fargo office in Silver Springs, killing Stride’s wife in the process. Now only five are left alive, and Stride spends the remainder of the movie blazing a trail across Arizona in his quest for vengeance. Along the way he runs into a couple of easterners, headed for California and a new life. The couple are Annie Greer (Gail Russell) and her less than capable husband John (Walter Reed). Stride’s inherent decency means that he can’t abandon these two greenhorns to their fate in hostile country, so he rides with them part of the way. By the time they reach a deserted relay station, the last important figure is introduced. This is Masters (Lee Marvin), an man of dubious character who Stride has had occasion to lock up in the past. However, Masters appears to bear him no ill will and makes it clear that his only interest is in finding the gold that was stolen from Silver Springs. When this oddly matched group sets out again the tensions begin to rise, and it seems only a matter of time before Stride and Masters will square off.

As I said in my introduction, Seven Men from Now was the seed from which the Ranown westerns were to grow. Just about every character, theme and situation would be revisited and honed to near perfection over the course of the next four years. Scott is the classical loner, haunted by the demons of his past and desperate to make up for the character flaws and inadequacies that brought him to his present state. He can be hard and ruthless when the circumstances demand but still retains a sensitivity to those who are dependent on him. Gail Russell was given a shot at a comeback with the reasonably meaty role of a woman who married a weak and ineffectual man but will stick by him for all that. Miss Russell’s story was a tragic one; were it not for a combination of insecurity and alcoholism she might have achieved much more than her appallingly short life permitted. Nevertheless, she plays her part perfectly here and it’s almost as if she was able to channel all the dissatisfaction with her own life into Annie Greer. It has to be said that Walter Reed is pretty colourless as the husband, but that’s not necessarily a bad thing when you’re looking to play a weak willed and essentially passive character. Lee Marvin, on the other hand, is all swaggering bravado and insidious charm. His nonchalant, sneering dandy with the long, green scarf and twin pistols is the perfect counterbalance to Scott’s underplaying. I’d say he actually steals the picture as he dominates every scene he’s in – the real standouts being his taunting provocation of Scott, Reed and Russell in the confines of a storm battered wagon, and the final one on one duel amid the barren rocks of Lone Pine.

Boetticher and Kennedy revisited this premise again and again in their movies: the small isolated group comprised of the obsessive avenger, the strong yet vulnerable woman, the expendable sidekicks and the villain that you half admire. Anyone familiar with Kennedy’s scripts will easily recognise the recurring dialogue, but the beauty of it is that it’s such iconic stuff it never actually sounds cliched. Boetticher’s direction here is first rate, making the most of the familiar Lone Pine locations – the bulk of the action in Seven Men from Now takes place outdoors and that’s a real blessing in any of his movies. There’s the usual mix of telling close-ups interspersed with glorious wide shots. The climax among the labyrinthine boulders creates a great sense of claustrophobia and allows for some marvellously framed images.

Paramount did western fans a real favour when they put Seven Men from Now out on a DVD a few years back. The R1 disc (I’m going to assume the R2 replicates it) is an excellent anamorphic transfer that I couldn’t fault. In addition to the main feature, there’s a boatload of great extras with the commentary track by Jim Kitses and the documentary Budd Boetticher – An American Original being especially worthy of mention. Seven Men from Now stands as a first class western on its own, but what makes it even more special is the knowledge that Boetticher, Scott and Kennedy would go on to produce still classier material in a very short space of time. If you haven’t seen this film then you really owe it to yourself to put that situation right as soon as possible – I can’t recommend it highly enough.

13 thoughts on “Seven Men from Now”