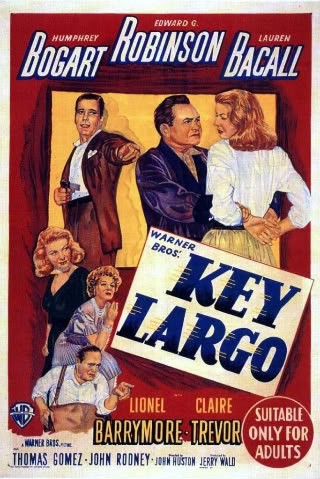 It’s hard to watch a film like Key Largo (1948) without being reminded of endings; it represented the final screen collaboration of Humphrey Bogart with both Lauren Bacall and Edward G Robinson, and it was one of the last movies he would make for Warner Brothers. Not only that, but it was also one of the last hurrahs for the old style gangster picture – but more about that later. It’s also a production that can be viewed from a number of angles: as a character driven drama, a gangster/noir mash-up, a commentary on the situation facing returning veterans, or as an allegory on fascism. Now this kind of multi-faceted approach can either lead to an unfocused piece or add to the rewatch value. I think the latter wins out here.

If the title and written prologue weren’t enough then the opening helicopter shot establishes the fact that the action takes place along the Florida Keys. As the camera zooms in on a bus making its way along the linking causeway we get our first glimpse of Frank McCloud (Bogart), a WWII veteran paying a visit to the relatives of a fallen comrade. McCloud’s destination is a hotel that, owing to the fact it’s the off-season, is virtually closed down. There is, however, one group of guests in residence when he gets there. None of these people seem especially friendly or anxious to welcome another visitor, and one of thier number, a Mr Brown, is conspicuous by remaining closed in his room. By and by, it emerges that McCloud’s companions are actually criminals, although that fact was unknown to the hotel owner, Temple (Lionel Barrymore), and his daughter-in-law Nora (Bacall). If McCloud had any suspicions, they are confirmed by the appearance of Mr Brown. Mr Brown isn’t his real name of course – he is one Johnny Rocco (Robinson), a one-time mob kingpin bent on rebuilding his criminal empire. At this point the already oppressive atmosphere grows heavier, both figuratively and literally, as an approaching hurricane threatens to tear up everything in its path. In the midst of all this, a duel develops between Rocco and McCloud – one that will finally be resolved on a motor launch bound for Cuba. 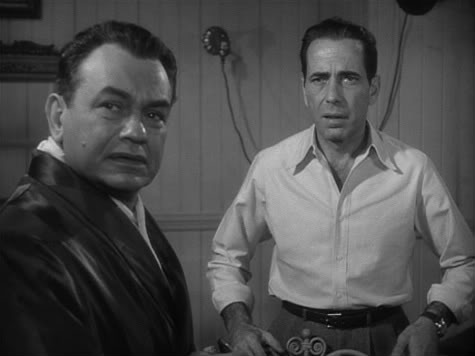 Key Largo was made at what was arguably the height of John Huston’s career, and its success is due to a combination of top class scripting (with Richard Brooks), photography, and acting. Bogart and Robinson occupy centre stage and their war of wills is what drives the whole thing forward. Eddie G’s Rocco is a devious and bullish creation, yearning for past glories that he must surely know in his heart are unattainable. Rocco and his cohorts are seen cowering before nature’s primal force and attempting to brass it out with a show of transparent bravado, pronouncing with unconvincing confidence that prohibition must surely come back and how things will be different this time. But these men are aware that they’re living out of time and it’s interesting to note that Al Capone, on whom Rocco was clearly based, was dead a year at that point. Bogart’s weary vet is one of his more complex characters, and could be compared to his Rick from Casablanca. Both men are initially reluctant to get involved or “stick their neck out” but do so eventually for the right reasons. The difference, however, is that Rick’s passivity was motivated by considerations of profitability whereas McCloud’s was the result of a deep disillusionment. That should have struck a chord with contemporary audiences: a whole generation of young men had marched off and risked their lives (and seen others lose theirs) in order to rid the world of oppression and fascism, only to return home and be confronted by a domestic version.

There are two key scenes that help define McCloud’s character. The first is a wonderfully photographed series of close-ups that show Rocco whispering suggestively into Nora’s ear (not a word is heard, but the inference is clear enough) before she spits contemptuously into his outraged face. With an unspoken dignity, McCloud moves across and quietly puts an arm around her shoulder before gently leading her away. I remember hearing Richard Brooks refer to this scene in a documentary as a moment of simple decency that everyone would like to emulate, and that’s hard to argue with. A similar situation takes place when Rocco humiliates his woman (Claire Trevor) by forcing her to sing unaccompanied as the price for the drink she craves. When he then goes back on his word, McCloud again does the right thing by pouring a whisky for the devastated woman despite the danger to himself. This is not a man who avoids confrontation due to cowardice or fear of personal injury but one who has grown apathetic and merely needs a prod to show his true colours. The aforementioned Claire Trevor deservedly won an Oscar for her role as the faded, alcoholic singer whose pride and self respect have been pushed into the background. That scene where she degrades herself in front of strangers through desperation is toe-curlingly effective and probably clinched the award for her. Lauren Bacall, in the only other significant female role, is much more subdued and is called on to do little more than gaze soulfully at Bogart. Of the four films Bogart and Bacall made together, this one is markedly different. The two Howard Hawks pictures had that director’s breezy playfulness about them, while Dark Passage was almost a study in bizarre coincidence. Key Largo has a grim, downbeat tone throughout that may surprise, or even disappoint, those hoping for a rerun of the couple’s previous work together.

Key Largo has been out on DVD for a long time now but the transfer still holds up well enough. I have the Warner UK version and the image is hard to fault, being pretty crisp all the way. I thought the dialogue levels were a little low but that’s probably just a feature of the film as there are a number of hushed conversations, and anyway Max Steiner’s atmospheric scoring doesn’t suffer. Extras are almost non-existent and are limited to the film’s trailer. The movie itself is a good example of how well Bogart and Huston worked together (it may come up wanting for those seeking out another Bogart/Bacall pairing though) and is the kind of picture that rewards multiple viewings. It gets the thumbs up from me. 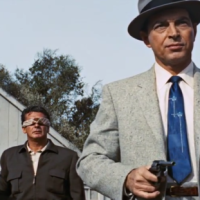 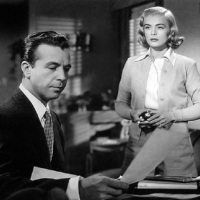