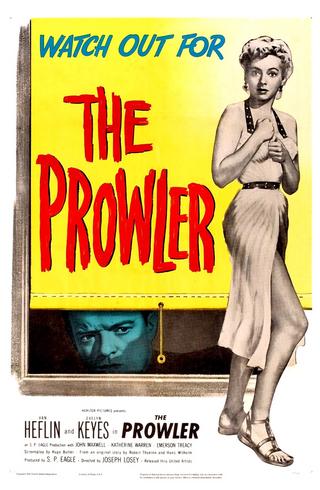 Film noir is a look and an attitude as much as anything else. There’s the darkness, both visually and thematically, and the fatalistic tone which creeps ever nearer the doomed characters treading the fine line dividing shadow and light, hope and despair, in this cinematic moral maze. If it grew out of the bitterness nurtured by the economic hardship of the 1930s, the wounds inflicted on society were then cauterized and desensitized by the horrors experienced in WWII. And the end result? A feeling of jaded weariness, of disenchantment when the post-war promise of a brighter future for all remained tantalizingly and agonizingly just beyond the reach of some. The Prowler (1951) is a film about disappointment and dissatisfaction, and the lengths people will go to, either consciously or unwittingly, in an effort to conquer this.

The opening sees Susan Gilvray (Evelyn Keyes) reacting with shock on realizing that someone has been observing her through her unshaded bathroom window. Naturally, she calls the police to report the incident and has a visit from a squad car containing an old pro on the eve of retirement, Bud Crocker (John Maxwell), and another younger man, Webb Garwood (Van Heflin). It’s the latter who takes the keener interest, not so much in the case itself as the lady at the center of it. You see, Garwood is a dissatisfied soul, a man whose youth was taken up with dreams of wealth and success as a professional athlete. When circumstances didn’t allow this to come to fruition Garwood became a cop, a second-rate job in his opinion and he began to brood. Here’s a man who feels life has cheated him out of what ought to have been his due, and his nocturnal visit to the luxurious Spanish home with the vulnerable and alluring woman inside has just added to his ethical itch. While our disgruntled cop readies himself to scratch while he’s fully aware of what he’s doing, a similar sensation is beginning to come over the woman, just not quite so obviously. She’s not happy either, and you read it in her demeanor, drifting listlessly around her well-appointed but empty home, as her husband (notably absent at least in visual terms until the fateful moment) is an older, less exciting man – and it’s later revealed that he is leaving her unsatisfied in more than one way. The scene is set therefore for a drama built around betrayal, deceit and ultimately murder. 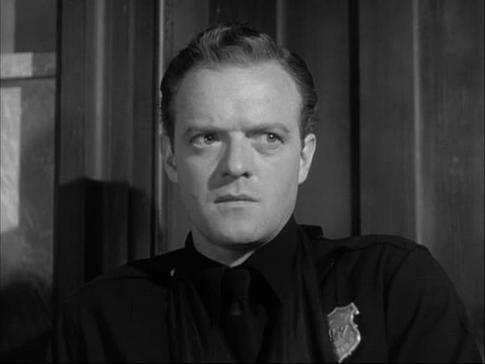 I guess what I’ve written above gives a fair indication of how the tale develops. However, I’ve deliberately left it there – what I mentioned essentially occurs in the first act, and most of it quite early on – as I think it actually moves in slightly unexpected directions, due to some good writing and a pair of strong central performances. The version of the film I watched comes with supplemental contribution from such noir experts as Eddie Muller, James Ellroy and Alan Rode who make the point of how the film is a critique of corrupt authority and how dangerous it is to put too much trust in this. I certainly don’t dispute that reading and I think it’s a major element of Dalton Trumbo’s script. Nevertheless, I found certain other elements, namely the disenchantment and disillusionment with hand dealt by life, every bit as noticeable and important. The character of Garwood has been warped and turned in upon itself by a sense of thwarted entitlement; it’s there in his words when he speaks of his lousy breaks and it’s also writ large on his face as he surveys the comfortable home occupied by Susan and her elusive husband, a marked contrast to the cramped and mean room he lives in. That post-war American Dream wasn’t delivering for Garwood.

As I said, the script was from Dalton Trumbo but this was the era of HUAC and the blacklist and so his name wouldn’t appear on the credits. Originally,  the story (by Robert Thoeren & Hans Wilhelm) was titled The Cost of Living, a phrase repeated by Susan’s husband during his radio broadcasts (voiced by Trumbo incidentally) and I reckon it’s a more apt one than the admittedly catchy The Prowler. The lead is driven by his materialism and his hunger for social status, and the constant refrain of how the cost of living is going down takes on a decidedly pointed meaning when we think how cheap life becomes in his eyes. Still and all, this isn’t some dull socioeconomic diatribe, it’s a pacy and not entirely predictable thriller, and director Joseph Losey moves his camera around with a calm fluidity – it’s never showy or self-conscious but effortlessly artistic. And the climax had me thinking of Anthony Mann and his penchant for driving his characters towards heights they struggle to scale. 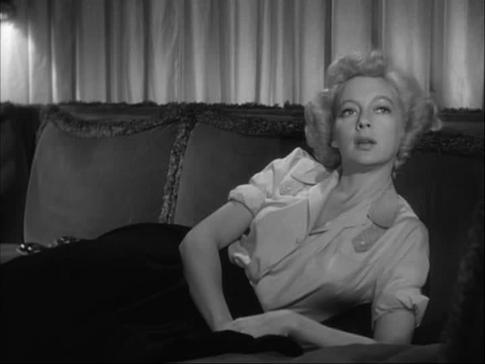 Some years ago I wrote a piece on Act of Violence and remarked then on the way Van Heflin was cast somewhat against type. The Prowler takes that a step further by almost entirely subverting the typical dependability of Heflin’s persona. Having him play a policeman, a figure one associates with protection and security, serves to further heighten the shock value of seeing him as a cold and manipulative schemer. Evelyn Keyes is very good too as the suburban wife bored by her everyday isolation, flattered by the attention yet also horrified by the increasingly chaotic turn of events. While there is some interesting support work, most particularly from an earnest and likeable John Maxwell, this is very much a two-hander and a fine showcase for the talents of the leads.

The Prowler came out on DVD first via VCI in the US and that’s the edition I picked up. I was happy enough with the quality at the time and the attractive extra features I referred to earlier were welcome too. A few years later the same company put out a Blu-ray version of the movie but I it sound like a significant upgrade so I just stuck with my older SD copy, and i can’t say I’m displeased. Frankly, I feel this is a fine film noir, well cast, well shot, well written, and well worth ninety minutes of anyone’s time.

16 thoughts on “The Prowler”