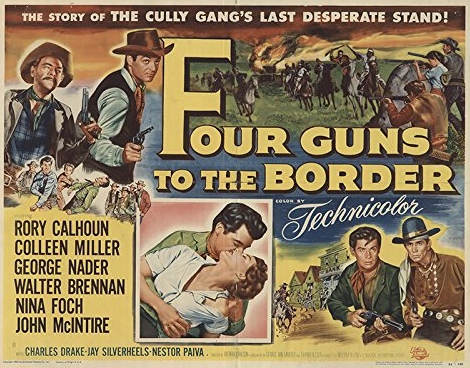 Generic and predictable – aren’t those terms we’ve all seen tossed casually and in derogatory fashion towards westerns before? Yet generic is no sort of criticism at all, in my opinion. Almost all films, and certainly the more interesting and rewarding ones, belong to some genre or other. Using the word generic is simply an acknowledgement of the fact that certain tropes and trappings are present, and thus should not be construed as some negative feature. Which brings me to “predictable”, and few genres have within them the range and variety of the classic western. So whenever someone presents you with bland labels such as those above, I’d urge caution and encourage everyone to see for themselves and make up their own minds. Now all of this is, I’ll grant, a rather long-winded way of telling readers that Four Guns to the Border (1954) is film which proudly wears its genre badges and also tells a story that flirts with familiarity but tramps off determinedly down its own distinctive path.

The story follows the four men of the title, a gang led by Cully (Rory Calhoun) and comprised of an aging outlaw Dutch (John McIntire), an Indian by the name of Yaqui (Jay Silverheels) and a comically awkward young man called Bronco (George Nader). This group is first seen carrying out a robbery, but an unsuccessful one where their efforts are for nothing as the safe they blow turns out to be empty. And so they move on, crossing the path of an old gunfighter Bhumer (Walter Brennan) and his daughter Lolly (Colleen Miller). This is the key event, for even as they separate, the Bhumers on the way to their home and Cully’s companions to a new job, the seeds of a powerful attraction have been planted. When Cully is offered the chance to rob the apparently ultra-secure bank in Cholla and simultaneously humiliate the town lawman Flannery (Charles Drake),  his one time friend and rival in love, he grabs it enthusiastically. In a sense though, all of this is incidental to where the plot is leading – a series of showdowns that bring out the humanity in all of the main players, altering their perspectives on life and their role in the scheme of things. Ultimately, it all winds up in place that is hard to foresee from the beginning, but the journey there and the spiritual growth and renewal that this provokes are not only highly entertaining but also, vitally, hugely rewarding. 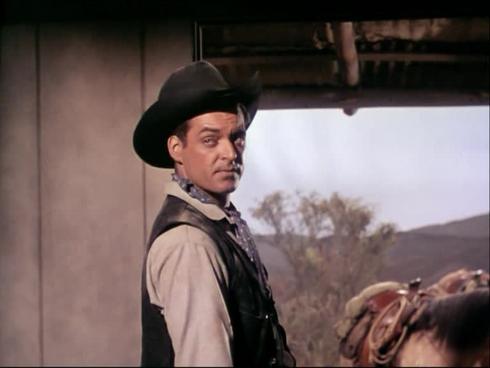 Four Guns to the Border was adapted from a Louis L’Amour story (one that I can’t recall whether or not I’ve read) and directed by Richard Carlson. He’ll be forever remembered, and rightly so, for his acting roles in Sci-Fi classics such as It Came from Outer Space among others, but he was a fine director when he turned his talents in that direction and would make another interesting western with Calhoun a few years later in The Saga of Hemp Brown. Clearly, he liked L’Amour’s writing for he would go on to direct another adaptation of the author’s work a decade later when he made Kid Rodelo. He paces the movie beautifully here, neatly drawing together the strands of a moderately complex affair in a brisk one hour and twenty minutes. The shooting is a blend of interiors and location work, including the Iverson Ranch, and it looks very impressive at all times. The attractive overall look of the production becomes quite beautiful on occasion in the hands of master cinematographer Russell Metty; his rendering of the storm is dreamlike and borders on the fantastic. Still, this is quite appropriate considering that what we’re presented with here is essentially a fable, an uplifting love story where the classic redemption motif is not simply applied but celebrated.

Calhoun is on top form as Cully, sore and surly to begin with, nursing a grudge and holding any finer feelings at a definite distance. If ever a character was in need of a form of spiritual salvation, it’s Cully. When he runs across Colleen Miller’s wide-eyed ingenue, the spark is immediately apparent. Sure Calhoun is a good western lead, as he proved time and again in his career, but Miller’s interaction with him, her infectious and innocent sensuality, is what elevates it all. Although Miller only made a small number of films before retiring early, her screen presence is quite remarkable, and I feel Four Guns to the Border would have been a far poorer and much more routine affair had she not been cast. 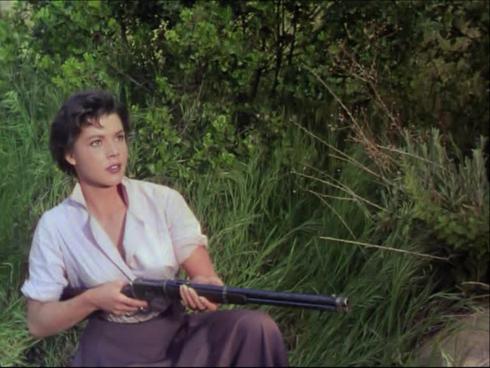 Classic westerns were frequently distinguished by the strength in depth of their casting and that was certainly true of Universal-International productions, where a seemingly inexhaustible pool of exceptionally fine character actors was available. Four Guns to the Border benefits greatly from having performers of the caliber of Walter Brennan and John McIntire competing with and complementing each other as authentic frontier types. George Nader and Jay Silverheels provide some gentle humor and the former is quite affecting in his clumsiness. I think it’s fair to say that any movie which can afford to have the likes of Charles Drake and Nina Foch in small to medium supporting roles is a rich one indeed. In fact, a brief glance at the names mentioned in this short paragraph ought to provide ample evidence of the kind of quality that is on view.

Four Guns to the Border is widely available on DVD, at least in Europe where it has been released in the UK, Spain and France. I’ve had the Spanish disc for some time now and I imagine all those versions are taken from the same source. The print is in fine condition with little damage and the Technicolor cinematography looks quite spectacular at times. Thematically, this is one of the classic 1950s Hollywood westerns, a tightly handled production blending action and characterization but placing more emphasis on the latter. There’s a maturity on show in the way the script examines relationships and the twists and turns taken on the journey through life. This is a finely crafted and deeply satisfying film, one I’d urge everyone who is keen on cinema to take the opportunity to view.

61 thoughts on “Four Guns to the Border”