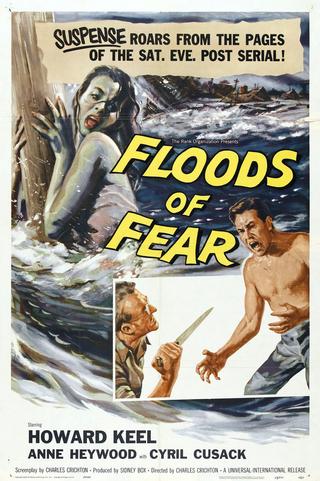 There’s drama to be found in extremes, which may be of the economic, political, social or emotional variety. The latter is, of course, the most engaging and involving from the viewer’s perspective and gains from being combined with some other highly charged circumstance. In Floods of Fear (1958) we’re presented with our extreme situation in the form of an environmental catastrophe, the floods of the title. In contrast to the big budget, disaster epics that would become popular in the years ahead, this modest British noir places the focus firmly on a handful of central relationships and this limited scale and scope is one of its great strengths.

It all begins with the aftermath of severe and prolonged rainfall and storms, the adverse weather having raised water levels in the Humboldt River to dangerous levels. The opening sees preparations underway to try to shore up flood defenses and prevent, or at least attempt to hold in check, a catastrophic inundation. With resources strained to breaking point, the state has taken to using convicts to assist in the repairs and fortification. When the elements flex their muscles though and sweep aside the levee another threat, a criminal one, is unleashed along with the flood waters. As a result, Elizabeth Matthews (Anne Heywood), who has been rescued from her stranded vehicle by convicted murderer Donavan (Howard Keel), finds herself holed up in her rapidly disintegrating home with the lecherous and cunning Peebles (Cyril Cusack) and injured prison guard Sharkey (Harry H Corbett). The tension among this disparate group is palpable while the desire to get away is rising as rapidly as the rank and freezing waters outside. Although all these characters have their own reasons for wanting to leave, the most pressing and intriguing seems to be that of Donavan, who appears to have a private score to settle. 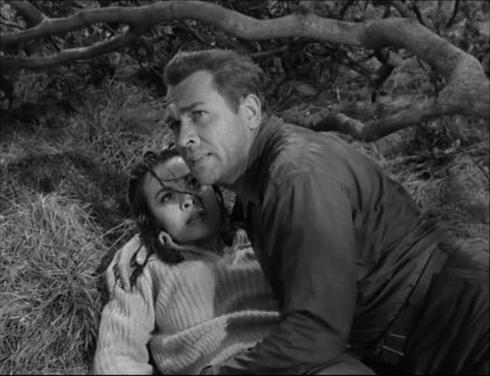 Floods of Fear is an unusual British noir, not only adopting the look and feel of the classic Hollywood variety but going a step further and setting its story in the US. That story was adapted from a Saturday Evening Post serial (later published in novel form) by John & Ward Hawkins called simply A Girl, a Man and a River. And it is a fairly simple and straightforward story, using the framework of the disaster as a background for the various human dramas taking place within. The main thrust is provided by Donavan’s quest for justice, or a reckoning, but it’s the smaller and more personal conflicts among the core cast members that account for the emotional punch the picture carries.

Aside from the fact there is a solid noir/thriller plot involving some interesting characters with credible motivation, the movie benefits enormously from the cinematography of Christopher Challis. Sure there is some stock footage cut in to allow the studio shot material to breathe a little, but that set bound work looks extraordinarily good for the most part, and it’s largely down to how well Challis photographed it. There are a number of terrific nighttime sequences with the characters struggling through treacherous tides, silhouetted against lowering and leaden skies just beyond the clawing branches of half-submerged trees and vegetation.  The direction by Ealing comedy specialist Charles Crichton is strong and maintains the pace and toughness that a movie like this depends on.

Personally, I’m not entirely convinced the film needed to be set in the US, nor am I sure the consequent necessity of getting the majority of the actors to adopt (with varying degrees of success) fake accents adds much value. Anyway, that’s the way the producers decided to go. Howard Keel had made his debut as a screen actor in a British thriller The Small Voice a decade before, and I found him quietly impressive in that role. Floods of Fear saw him back in British films, once again outside his more natural home in musicals and once again turning in a solid performance. It’s a physical role and Keel provides a very powerful presence which is essential under the circumstances. Apart from battles against the tides, he gets to take part in a tough and well choreographed fight with fellow US actor John Crawford at the climax. Anne Heywood is both attractive and credible as the girl trapped by the environmental and human dangers, and demonstrates some welcome range and character development as the story unfolds. One of the standout performances comes from Irish actor Cyril Cusack – creepy, shifty, emotionally unstable and wholly untrustworthy, he steals nearly every scene he appears in. I want to add a word of praise for Harry H Corbett too, an actor whose dramatic roles have not always made a particularly positive impression on me. This is one occasion where I felt he was fine though and there was none of the broadness that I feel he allowed to creep into some of his straight parts. 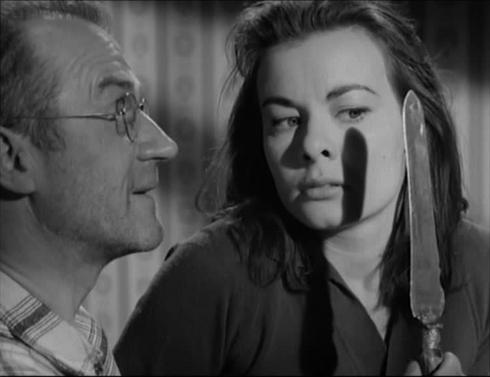 Floods of Fear is a film I had first stumbled upon on TV decades ago and it always stuck in my mind. As is often the case, the movie proved a bit difficult to track down for viewing during all those years and so it was a pleasure to discover it had been released on DVD  in the UK by Strawberry Media. The disc uses a fairly good print and the movie looks good overall. However, a 1958 production would surely have been shot in some kind of widescreen ratio (1.75:1 or 1.66:1 I’d have thought) and is presented 1.33:1 on the DVD. It doesn’t look cropped so I suppose we’re talking about an open-matte presentation – something which is obviously not ideal but is not terrible either. All told, I’m glad the film is available commercially and I think it’s one that should win over a few new fans.

15 thoughts on “Floods of Fear”