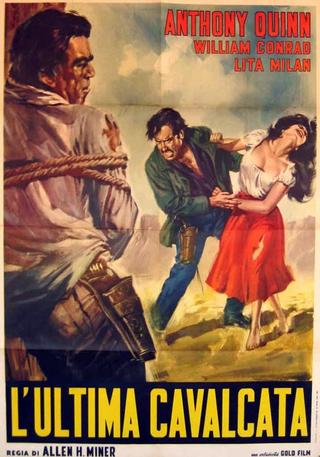 I’ve never been a success at anything I tried to do. Anything I ever tried to do ever, failed. I’ve been a failure and that’s all, a plain old failure. But I’m not going to be this time. I’m going to make this one. I’m going to do this right!

That quotation comes late on in proceedings, uttered reluctantly and somewhat desperately by a man goaded into justifying his actions, the result of baiting of one form or another he’s probably struggled with all his life. Most visitors here will know my fondness for small productions and the reasons for that, not the least of which is the opportunity for experiencing the good old heartfelt reactions and observations one can often find in such modest films. The pared down quality leaves little room for the extraneous; when every word and shot has to count, then the odds are we’re going to see something which presents moral conundrums and human truths in a frank and candid way. The Ride Back (1957) is such a film.

Restrictions tend to stimulate creativity, knowing what you can’t do being a powerful way of forcing one to focus on what can be done. The Ride Back opens with men walking into a barber shop, armed men who mean business. Rather than prosaically show what they say and do and how their presence is greeted, the filmmakers cleverly cut to two little boys playing in the street at the same time. As the adults enter the shop the boys emerge from an alley, one escorting the other with a “gun” fashioned from a branch. As the prisoner bolts his captor raises his weapon, and then the deafening crash of real and deadly gunfire drags the attention back to the world of grown-up violence. A man launches himself out into the street, discarding soap and towels as he flees. This person making a bid for freedom is Roberto “Bob” Kallen (Anthony Quinn), and his flight will carry him  across the border into Mexico where half of his bloodline hails from. Where there is a fugitive from the law there  must necessarily be a pursuer. In this case it’s a lone figure; Sheriff Chris Hamish (William Conrad) is a restless combination of truculence and trepidation, driven on by a set of personal demons which will only become apparent gradually.

The small scale of the production here points clearly to the limited budget involved. There are many of the characteristics of a television piece visible in the tiny cast and the overall feeling of spareness. Writer Antony Ellis and director Allen H Miner (although I’ve seen claims he didn’t actually have the reins all the time) did almost all of their work for the small screen. Now this isn’t meant as any criticism, I’m merely noting that you do get the sense that the whole thing was made by people who were familiar with working to a tight schedule and all the discipline that was required in such circumstances. The story is pacy and the focus never wavers, building the relationship between Kallen and Hamish in a believable way. The enmity and mutual distrust is well handled and grows into a mature understanding of each other’s strengths and weaknesses as the titular ride back throws up a number of challenges that will force both men to confront their own motivations. The movie benefits hugely from the skill and artistry of cinematographer Joseph F Biroc, his shooting of both the interiors and exteriors shows his mastery of lighting, and some clever use of angles emphasizes either space or confinement according to the needs of any given scene. And of course, for fans of western movie theme songs, there is one of those memorable narrative efforts delivered by Eddie Albert to open and close the film.

Anthony Quinn’s part as a half-Mexican gunman must have been a breeze for him, which is not a suggestion that he put any less into his role. No, I mean that there was a “big” quality to the man, a grandness that he seemed to turn on effortlessly and which was ideally suited to this kind of flamboyant and romantic character, something he seemed able to dial up or dial down at will. He’s very good as the sympathetic fugitive, interacting naturally and effectively with both his passionate peasant lover Lita Milan (The Violent Men) and also with Ellen Hope Monroe, the tiny and silent survivor of an Apache massacre. 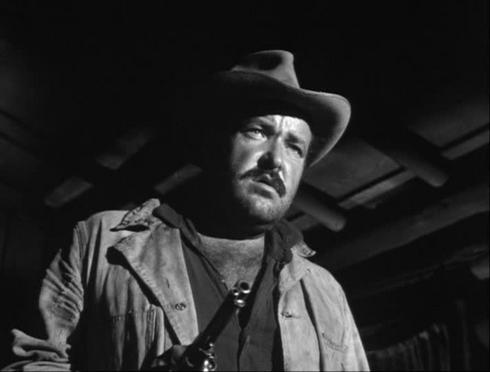 William Conrad served as both producer and actor on The Ride Back, which I think indicates his level of interest in the project. Quinn played the showier and more eye-catching part, but Conrad’s sheriff is the more interesting character. Both men are headed for a form of personal redemption and both achieve this by the end, conquering distrust of others and distrust of oneself respectively. Conrad nailed the insecurity of his underachieving lawman perfectly, exercising caution at every turn and testing the ground suspiciously before every step. Such was the honesty of his wariness and self-doubt that I found the climactic scenes, where he essentially attains what he’s longed for so deeply by a circuitous and oblique route, genuinely moving. A fine performance.

The Ride Back was released on DVD in the US many years ago by MGM. The 1.33:1 ratio (once again) sounds unusual for a 1957 movie but it looks good overall and, in a way, fits the television vibe surrounding the production. Biroc’s black and white cinematography is nicely reproduced and I wasn’t aware of any major print damage at any stage during my most recent watch. This is by no means a major western and never aspires to be. What it is, on the other hand, is a spare, character-driven piece of storytelling, a virtual two-hander where two very good actors play off each other in an expert fashion and draw in the viewer with the candor of their work. If you’ve not seen the movie, you should try to catch up with it as soon as possible.

26 thoughts on “The Ride Back”