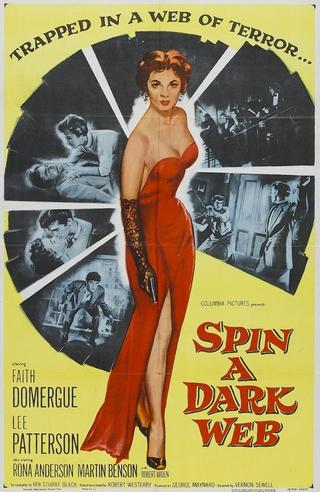 How essential is the femme fatale in film noir? Sure her presence is one of the characteristics you will hear mentioned time and again should  you ask people to check off a list of the necessary ingredients. But is this presence or absence actually integral, and does it define the style? I’m inclined to think no, I’ve seen plenty of undoubted films noir where this character didn’t appear and I don’t feel their dark credentials were diminished as a consequence. On the other hand, the question represents an itch I get the urge to scratch every so often, especially after watching a movie like Spin a Dark Web (1956), where there is an explicit femme fatale whose malign influence drives the plot.

Whatever else one might say about film noir it certainly requires what might be termed the fall guy, someone who manages to get himself involved in a complex and perilous situation. Jim Bankley (Lee Patterson) fits that particular bill here, a Canadian living in post-war London, hanging around the fringes of the fight game and keen to pick up some easy money fast. He’s casually attached to a fight trainer’s daughter, Betty (Rona Anderson), but is restless and hungry for cash, restless enough to drop her if the rewards are appealing enough. Looking up an old friend leads to a encounter with gangster Rico Francesi (Martin Benson) and his predatory sister Bella (Faith Domergue). What follows won’t create too many surprises – Bankley is drawn by the glamor of the rackets and Bella is only to happy to lure him ever deeper into her web. As ever, while the profits of the racketeering and the attentions of the dangerously seductive Sicilian prove attractive, there will be a moment of truth, an occurrence which will bring home to our anti-hero the sourness at the back of it all. And that’s when the real danger kicks in… 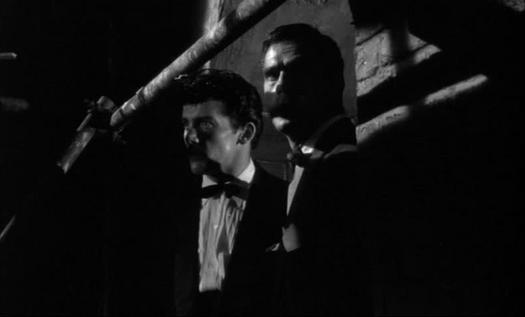 I don’t suppose many people will be queuing up to sing the praises of director Vernon Sewell but the fact is I’ve become very fond of his work. He made a series of short and tightly paced movies throughout the late 1940s and the 1950s which are, based on the evidence of those I’ve seen so far, very entertaining and occasionally stylish too. Spin a Dark Web is, as I’ve acknowledged, a standard gangster yarn. Nevertheless, the extensive location shooting, much of which is done in a deliberately impersonal documentary style, adds a grittiness to the movie. Additionally, the planning and execution of the complicated racing sting that fleshes out the middle section of the film is well done and highly absorbing. Throw in a number of tough action set pieces and we’re looking at a solid little noir thriller.

Faith Domergue (Where Danger Lives) is the Hollywood star handed top billing in Spin a Dark Web, and the full-on femme fatale referred to at the top of this piece. She’s the kind of actress I can take or leave, largely dependent on the role she was asked to play. The role of Bella is one that works well in that it uses her cold passion to its best advantage. I think she possessed a detached chilliness and that’s ideal for the part of the self-absorbed and psychopathic woman. Those traits are ideal in the femme fatale, and it’s her conscience-free ruthlessness that makes this film succeed. So, can I answer the question I posed for myself? I’m going to hedge it by saying the femme fatale is essential here; without her deadly allure the fall guy or patsy is rendered meaningless and the film is stripped of much of its potency. 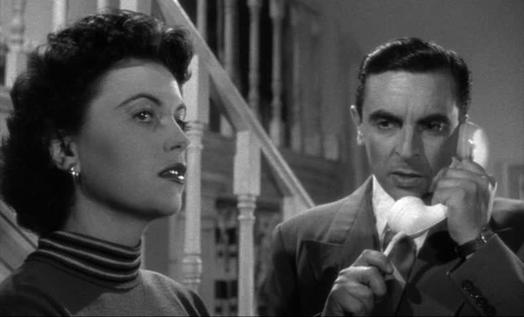 Balance is always important so a counterweight to the femme fatale in the shape of a Girl Friday figure is usually desirable, and it’s hard to think of the better choice for such a part in 1950s British cinema than Rona Anderson. She has the natural grace and charm to offset the driving aggression of Domergue, the selflessness to highlight the hollow appeal of the villainess. What would the British crime film be without Lee Patterson? I liked his work on The Flying Scot when I viewed it a few years ago and Spin a Dark Web again sees him turning in one of those typically dependable performances in a shady, semi-heroic part. I’m not sure I’ve seen much of Robert Arden beyond his central role in Orson Welles’ Mr Arkadin. He has the kind of hulking amiability about him that lends itself well to sidekick or best friend types, and just enough edginess to carry the notion of a man comfortable on the shadowy side of the street. Martin Benson is fine as the chief gangster, although he does stray close to caricature on a few occasions. Finally, there’s good support from familiar character actors Sam Kydd and Bernard Fox.

Spin a Dark Web has been released on DVD in the US by Sony as part of their MOD line. The disc only carries the movie and the trailer but it looks strong and is presented in an attractive 1.66:1 widescreen ratio. The film has also been put out in the just released Noir Archive Vol. 2 on Blu-ray, a set I may well pick up as it contains a number of other interesting sounding films I don’t already have. All in all, I found this an excellent British film noir, well acted and directed and coming in at a snappy hour and a quarter.