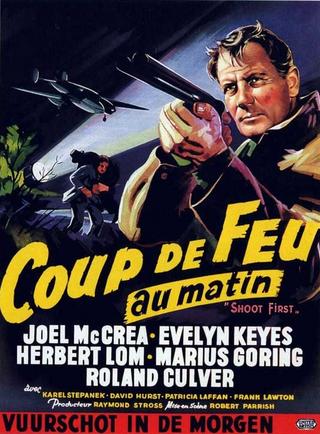 Hitchcockian is a word that ought to be reasonably common for anyone familiar with the movie reviewing/commentary world. Mind you, time was the term got recycled regularly in relation to new cinema releases, although my impression is that this hasn’t been  happening so often of late. This might be down to recent films not fitting the bill, a gradual waning in the influence of the great man, a lack of awareness (conscious or unconscious) among reviewers. Or maybe I’m just mistaken and it’s as widely used as ever. Whatever. Today’s  film for consideration, Rough Shoot (1953), feels Hitchcockian to me, or perhaps it might be more accurate to talk a Hitchcockian throwback. By the 50s, Hitchcock himself was shifting ever deeper into more complex and layered thrillers. Rough Shoot, with its wrong man mix ups and well-judged combination of jauntiness and suspense feels closer in tone to some of the earlier, pre-Hollywood British thrillers.

Colonel Taine (Joel McCrea) is a US artillery specialist cooperating with the British military and therefore living in Britain. Actually, it appears to be an idyllic existence at the beginning, as Taine chats with the crusty old type he’s letting some land from before wandering off with warnings to watch out for poachers, black marketeers and other interlopers still ringing in his ears. Right on cue, he spots an unknown man trespassing on his property and thus plans to send a blast of buckshot in his direction to discourage him. However, this is no poacher someone else (Marius Goring) has the sights of a rifle trained on him, someone planning to do more than merely throw a scare into him. Two shots coincide and the result is a dead man, and an appalled Taine convinced that he is responsible. Logically, one ought to report the accident immediately yet dramas such as this depend on protagonists suffering from panic and sudden rushes of blood to the head. And so it follows that Taine attempts to conceal the body temporarily, but the actual shooter is keen to take care of matters himself. At this point the tale looks to be drifting determinedly towards film noir territory, with Taine fretting and haunted by guilt while his wife (Evelyn Keyes) is growing increasingly suspicious. And then, in that 1930s Hitchcock style, the tone shifts smoothly towards something a bit lighter with the arrival on the scene of a vain Polish spy (Herbert Lom) and his MI5 boss (Roland Culver). From here the pace picks up considerably, with spies coming and going, a race from the countryside to London to reveal the McGuffin before everything winds up in explosive fashion atop Madame Tussauds. 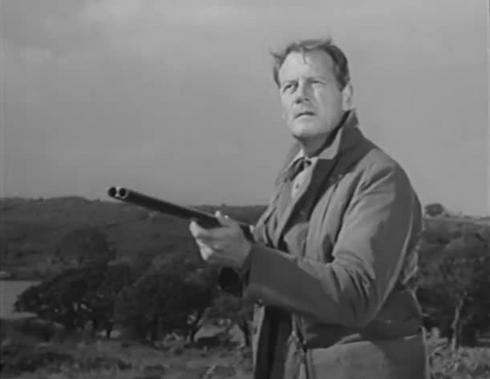 The writing is always important in the success or otherwise of movies and Rough Shoot comes with a strong pedigree. The source material is a novel by Geoffrey Household of Rogue Male fame. There is some of the rural menace of that noted work on show here but I think it’s fair to say that the adaptation by the great Eric Ambler only strengthens the finished product. I’m of the opinion that Ambler was the finest espionage/thriller writer of the mid-20th century, a superb craftsman and if his screenwriting didn’t quite match the heights attained in his novels, it was still of a high standard indeed.

Robert Parrish moved from a successful stint in the editing department in the 40s to become a director in the 50s. That decade saw him produce some excellent films, from the noir of Cry Danger at the beginning  to a couple of first rate westerns, Saddle the Wind and The Wonderful Country, right at the end. By the 1960s Parrish had seen his best days behind him but Rough Shoot appeared when he was on top of his game. He keeps the pace up and handles the tonal shifts very deftly, never allowing any jarring moments. He moves the camera around well too, making the most of the British locations as well as lining up some effective and atmospheric interior shots, capably assisted by Stanley (Pink String and Sealing Wax) Pavey. 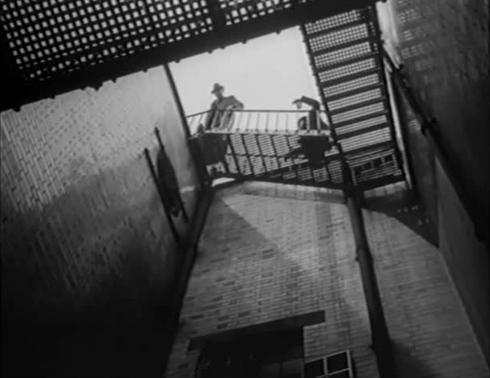 Joel McCrea epitomizes understated dignity for me, he had that old-school decency down pat and watching him ease his way confidently across the screen invariably evokes a sense of reassurance. These qualities made him one of the great western stars but it translated equally well to other genres too. Rough Shoot presented him in one of his rare non-western roles in the post-war years and the largely rural setting could be seen as a comfortable compromise, particularly so as the film was made not only outside of the west but outside of the US too.  Marius Goring was one of the stalwarts of British cinema, appearing in some of the most notable movies. I think he makes a fine villain, cold steel draped in silk and posing a genuine threat every time he’s on view. In contrast to this icy menace is the knowing charm of Herbert Lom, and there’s equally delightful work from Roland Culver. The main female role fell to Evelyn Keyes – she wasn’t given a huge amount to do but does her supportive and resourceful stuff perfectly well. The other female parts are extremely limited  – the striking looking Patricia Laffan (I always think of her as Poppaea to Peter Ustinov’s Nero in Quo Vadis) seemed to be set for something more substantial and interesting but disappears too soon.

Rough Shoot is another of those movies that almost inexplicably remains unreleased for home viewing. The quality of the cast and crew, not to mention the entertaining story, would suggest this title should have been put on the market before now – many lesser works have been long available, after all. I can only think that there must be some difficulties or confusion over the rights which are holding this up. If so, I fervently hope they can be resolved some time soon. I’m of the opinion that this movie, Hotel Reserve and State Secret are the three British films most urgently in need of proper, official home video releases. Let’s hope somebody manages to do something about this. In the meantime, Rough Shoot can be be viewed online quite easily – hardly a satisfactory situation, but it’s the only option at present.

For another take on the movie, you can check out Laura’s thoughts here.