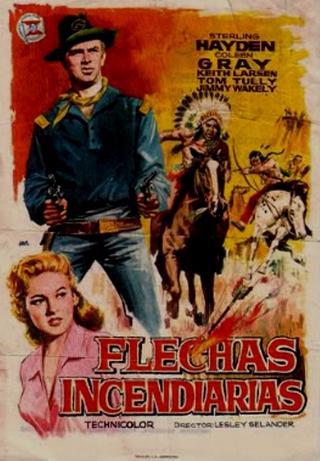 Unfulfilled promise, is there anything more disappointing? I’m talking about movies here, of course, and not life in general. This may not be the most enticing opening to a post but it’s honest and it does reflect my feelings after I’d watched Arrow in the Dust (1954) for the first time. On paper this ought to have been right up my street – it’s a mid-50s western starring Sterling Hayden, directed by Lesley Selander and is built around the kind of redemption scenario that typically draws a positive response from me. For all that though, it didn’t work for me, it fell flat and even the relatively short running time seemed excessive.

That promise I spoke of is right there in the credits and the personnel involved, and the tense, nervy opening scene feeds into this. We’re introduced to Bart Laish (Sterling Hayden) and no time is wasted in establishing the fact he’s a deserter from the army, and a cautious and jumpy one at that. When his escape leads him unexpectedly upon the scene of an ambush, one where the sole survivor is an old friend, he’s presented with a moral dilemma which will occupy his conscience for the remainder of the tale. That friend is Major Pepperis (Carleton Young), a newly assigned commander who is at death’s door and appeals to Laish’s sense of decency to carry a warning to an endangered wagon train. In brief, Laish puts his instinct for self-preservation to one side for a time and assumes the identity of the dead officer. The question is whether he can pull off this imposture, and how it will affect him. 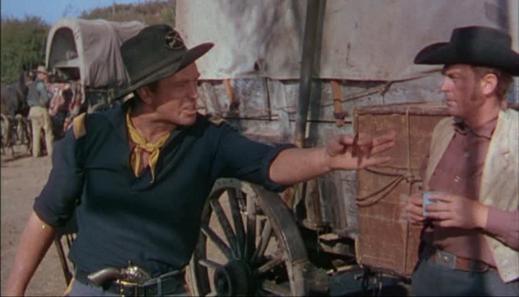 Sounds reasonably attractive, right? What should have been a winning formula left me cold, worse than that it left me bored too. I lay the responsibility for that with the writing and the technical limitations imposed by a cheap production. For a redemption tale to succeed it’s necessary to take the protagonist on a journey, a spiritual one as much as a physical one. Well, Hayden embarks on the  physical part but there’s never a sense of his evolving as a character, as a person. He uses his presence and that trademark brusqueness but the script offers no opportunity for growth or development. None of this is helped by the nebulous and vague nature of the antagonists – the faceless, rampaging Indians. They are shown almost exclusively via stock footage and I get the impression the script was tinkered with to account for the ever changing groups of raiders – there’s  some flummery mentioned about Pawnee and Apache bands allying themselves against the common enemy.

And that stock footage really is problematic. Sure there may be other movies where the technique has been applied morel liberally, but it jarred every time I saw it (which is a lot!) and took me out of the story. Lesley Selander is a guy whose films generally appeal to me and I tend to actively seek them out for the  hard-bitten sparseness. Here though, I found the constant insertion of recycled footage broke the rhythm of the direction and distracted me badly.

So, that’s about all I have to say on this film, and I know it’s quite a bit less than is customary on this site. Hayden does what he can with the material, Coleen Gray gets short-changed in an underwritten role, and Tom Tully maybe fares best as a crusty and wily scout.

Now I’m fully aware that this stuff is all entirely subjective – one man’s meat is another man’s poison and so forth – and there will be those who feel I’ve been too harsh in my criticisms. That’s as may be but I can only call it as I see it. I realize too that a future viewing might elicit a different reaction – to be honest though, I can’t see myself returning to this for some considerable time. Not wishing to finish on a wholly negative note, readers may wish to check out some more enthusiastic takes from both Laura and Toby.

12 thoughts on “Arrow in the Dust”