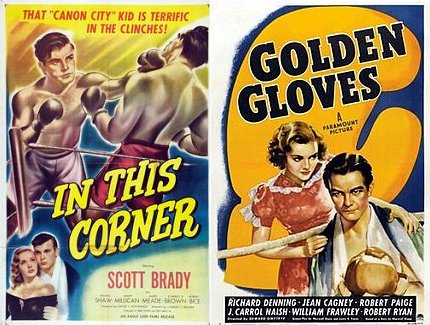 The fight game, with its allusions to glory and honor taking a ringside seat with corruption and manipulation, has often been featured in films noir, either peripherally or as a central plot element. Today, guest poster Gordon Gates focuses on a couple of boxing movies that don’t get talked about so much.
A double bill of boxing programmers with early Robert Ryan, Scott Brady and Richard Denning performances:
Golden Gloves (1940) & In This Corner (1948)
These two boxing films are early examples of what would become top flight noir films such as Champion, The Set-Up and The Harder They Fall.

First up is Golden Gloves from 1940

Richard Denning is an up and coming amateur boxer who makes a couple of bucks on the side, boxing for small time racketeer, J. Carrol Naish. Naish runs a string of boxing clubs that holds mismatched fights to packed crowds. “The people want knock-outs. So that is what i give them.” Robert Paige plays a newspaperman out to expose the racket which of course annoys Naish no end.

Paige arranges an amateur boxing tournament with straight up matches and proper refs, doctors etc. When George Ernest, the kid brother of Denning’s fiancée, Jeanne Cagney, is killed in one of Naish’s mismatches, Denning decides to join Paige and clean up the sport. Naish has other plans, and decides to wreck Paige’s next event by planting a ringer, Robert Ryan. (Ryan’s second credited role) Ryan’s job is to win the amateur event and then tell the papers he is really a pro.

This of course would destroy Paige’s attempt at cleaning up the sport. Naish now murders a boxer who threatens to spill the beans to the press. There is plenty of double dealing and knives to the back going on in this one. Edward Brophy, who plays a crooked manager, is a complete hoot to watch. Needless to say the last fight becomes a bout between Denning and the ringer, Ryan.

Denning manages to pull off a win to save the day while Naish and his gang are grabbed by John Law for the murder.

While I’m not saying this is an actual noir, there are plenty of flashes throughout the film. The cast and crew here would go on to be featured in many film noir.

The film was directed by Edward Dmytryk with help from an uncredited, Felix Feist. Dmytryk of course went on to helm the noirs Murder, My Sweet, Cornered, Crossfire, Obsession and The Sniper. Feist also dabbled in film noir with The Devil Thumbs a Ride, The Threat, The Man Who Cheated Himself, Tomorrow Is Another Day, The Basketball Fix and This Woman Is Dangerous included in his resume.

The D of P was Henry Sharp who lensed Ministry of Fear, The Glass Alibi, High Tide and Guilty.

The film was written by noir regulars Maxwell Shane, Fear in the Night, The Naked Street, The Glass Wall and Lewis R. Foster, who did Crashout and Manhandled.

This one has Scott Brady in his third film and first lead, as a just out of the Navy scrapper who wants to become a pro boxer. He tells his girl, Anabel Shaw, that he is off to join an old Navy vet who manages a boxing club. Brady tells her that once he makes his fame and fortune, they can get married etc.

Brady finds the old vet has not managed a fighter in years and the club is just an old rooming house with himself as the only boxer. Brady sticks it out and is soon hired as a sparring partner at a club owned by a mobbed up manager, James Millican. Brady is soon signed to a contract by Millican after he decks a ranked fighter during a sparring bout.

Brady KO’s his first opponent and is soon moving up with 9 straight wins. His girl Shaw joins him and life looks good. That is till Millican informs him he is to take a dive in the next weekend’s fight. Millican’s mob is placing a large wager at long odds on Brady’s opponent, and his assistance is required. Brady is more than a little annoyed at this idea and tells Millican to get stuffed. Brady intends to win and to hell with the mob! Of course the mob has a back-up plan. They stick a punch-drunk boxer one step away from the morgue in with Brady to spar with. The boxer, Johnny Indrisano, goes down in a heap at the first punch and is hauled off to the hospital. It is the night of the fight, and Brady is getting ready to enter the ring when a telegram is delivered. It states that Indrisano has died from Brady’s punch to the head.

Needless to say this news throws Brady’s game off and he is savagely thrashed, just like the mob wanted. He asks for a re-match in 3 weeks and gets it. He trains hard but the death of Indrisano eats at him. The day of the fight, Brady sends Shaw off to see about helping out the dead boxer’s family. Imagine the surprise when Shaw finds no record of Indrisano’s death.

She digs deeper and discovers the whole thing was a mob ploy to upset Brady. She hunts down the quite alive Indrisano who is being stashed at Millican’s country house. Of course while all this is going on, Brady is again being pummeled in the ring. Shaw, the police and the just rescued Indrisano get to the arena just in time for Brady to rebound for a KO. Millican is grabbed up by the cops and the film is wrapped in just under an hour.

The director was Charles F. Riesner, whose claim to fame was Buster Keaton’s Steamboat Bill Jr and the Marx Brothers’ The Big Store. The D of P was Guy Roe who worked on noir such as, Railroaded, Behind Locked Doors, Trapped and Armored Car Robbery. The story is by Fred Niblo Jr who worked on Convicted, The Incident, The Bodyguard and The Wagons Roll at Night.

Ex-pug Johnny Indrisano sported a 64-9-4 record as a pro and beat several world champs during his career. He then became a character actor and a trainer for boxing films. He has bit parts in 99 River Street, Johnny Angel, The Bodyguard, Knock on Any Door, Tension, Borderline, Force of Evil, The Set-Up and about a dozen more noirs and numerous TV shows.

Nifty little low renter that is better than I make it sound.